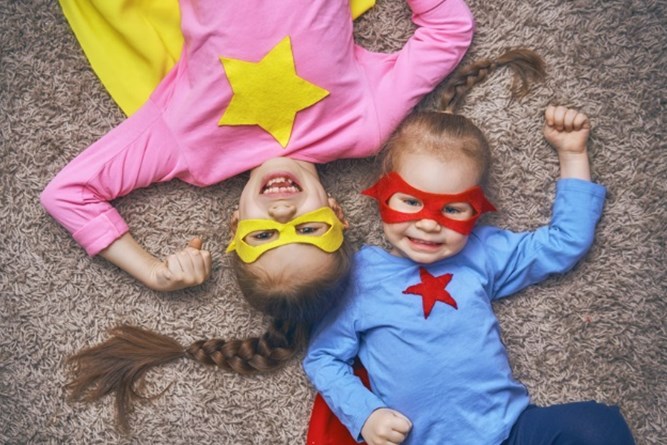 Kubla loves superheroes. We like to make up our own, each with their own special powers and back story.

Kubla likes being Rabbitman. He was bitten by a radioactive rabbit. He can jump really far and has super hearing. A master spy, he hides in the bushes and can hear everything anyone in the park is saying.

His friend is Stinkbomb. He was bitten by a genetically modified pig. He can’t fly, but he can squeeze out stinky farts whenever anyone tries to grab him.

Funny girl was born with a powerful sense of humour. She’s not too strong, but she’s super funny. She fights evil by making her enemies fall down laughing.

Me, I’m Mr. Stupendous. My powers—super strength and being awesome. Little ones like the name because they’re pretty sure it means Mr. Stupid.

At night Kubla pretends he’s Candyman, an alien from another planet. He has honey in his veins instead of blood, and a cookie in his head instead of a brain. He poops chocolate and can eat all the candy he wants. He’s very powerful, but is easily defeated by broccoli. He’s the sweetest of all the superheroes, and gives the best hugs.

What fun superpowers do you and your kids have?

In two weeks I’ll give a free Kidorable Umbrella to whoever makes my favourite comment and shares this post on the platform of their choice.