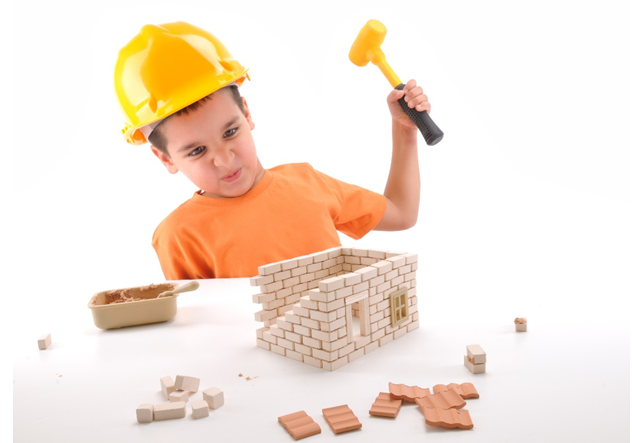 When Kubla was a toddler, he showed no interest whatsoever in stacking blocks. Knock down blocks—absolutely. Make rockets or dinosaurs with his blocks spread flat on the ground—sure. But his creations rarely get more than two blocks high.

In a favorite game of ours I stack the blocks up as fast as I can while he circles the room. At each pass he knocks them down. We count together how many I can throw together before Kubla the Destroyerdemolishes my tower. He learned to count this way.

There’s a part of me that wants to tell him he’s doing it wrong. Kids are supposed to learn to stack up blocks, aren’t they—not just knock them down, or use them to make pictures on the ground? But I never throw a wet blanket on his joie de vive.

Whenever he discovers a new toy or plaything, I show him its standard use. Sometimes hecopies me. More often he discovers some creative way of his own to have fun.

I never correct him, showing him the ‘right’ way to play. The only right way to play is a way that is fun, and all kids are naturals at that.

What off-label ways do your kids play with their toys? Do you ever tell them to stop kidding around and follow the directions instead?